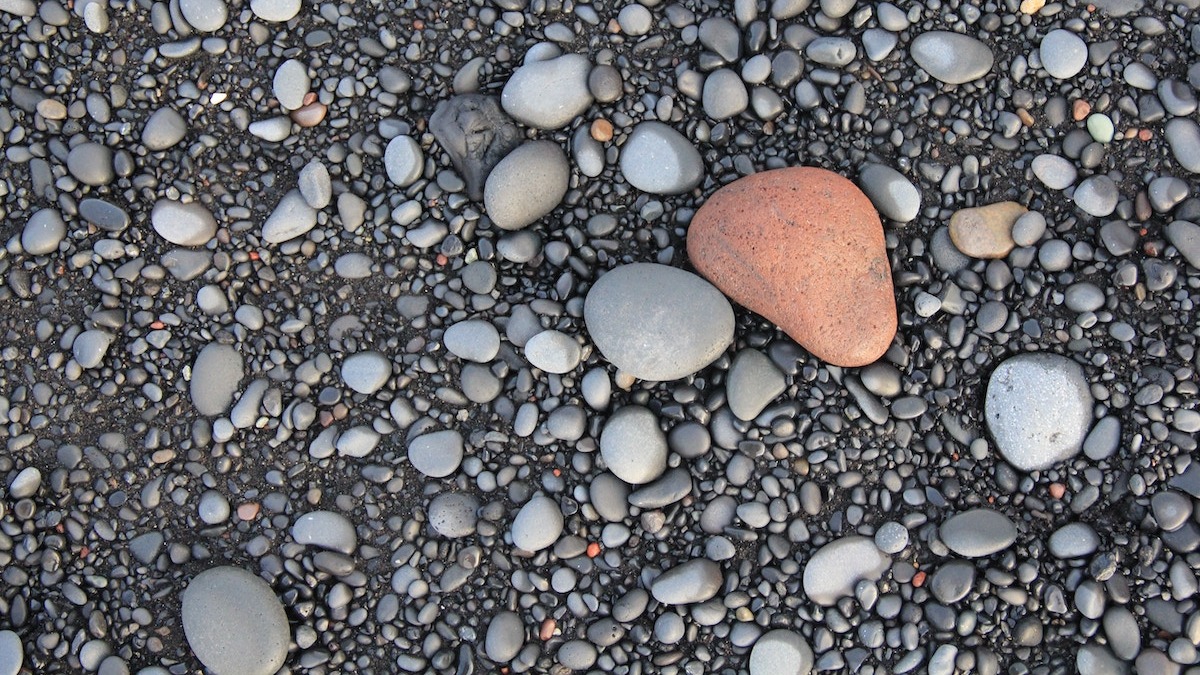 The Insider’s Guide to Diversity and Inclusion in the Workplace

Diversity and inclusion in the workplace should be a priority for every organization. Find out how to implement processes in place to develop an inclusive culture.

Diversity, equity and inclusion, or DEI, are the three pillars of corporate wellbeing. I am not too fond of the abbreviation, as it makes it easier for organizations to conflate the three words and thus obfuscate their meanings, which, whilst contingent, are all distinct from each other. Diversity and inclusion in the workplace is something I will go on to define later.

This conflating of meanings is dangerous and all too common practice. Without fully understanding what each of these words mean, you cannot correctly implement them into your organization.

Yes, you would be right in thinking that the specific terminology, focus groups, values and reasonable adjustments around DEI are always changing and largely increasing, as we become more of a progressive society (some would say tolerant, however, I will expand on my dissatisfaction with this once commonly used watchword later on).

This element of volatility makes it even more prudent to have a good grasp of what diversity, equity and inclusion mean in the workplace. Having such will give you the necessary foundation to align your team members with agile strategies that are ingrained well into the culture of your company but malleable enough to maneuver your team around times of change and shifts in attitudes.

There is no such thing as a diverse individual.

Diversity is a relational and contextual concept; a set of characteristics pertaining to a specific group of people, in a specific setting, measured based on a collective whole.

So, what makes a group of people diverse?

This is the part that many organizations fail at. They look at diversity as a checklist, and once they have ticked off one of each of the above-mentioned identities, they believe their job is done.

For example, there could be a team comprised of 50 people, all from different religions, educational backgrounds, and representing various body shapes, but if there is only one woman or one ethnic minority then that is a pretty undiverse group that so happens to have quite a few people of various faiths.

Why? Because, unfortunately, within certain contexts, there are groups of people that are less dominant and, as a result, often have less privilege and can be disenfranchised within work settings.

So, within the context of a North American standard workplace, an individual that identifies as an American, English speaking, white or light-skinned, heterosexual, cisgender, able-bodied, university educated, atheist, millennial or gen x, middle-class male of average weight (195.8 lb, for US) would be considered the most dominant, as their characteristics deviate the least from the norm of an average workplace in the US. Thus, a team consisting of a majority of individuals that identify with at least three of these characteristics would be considered an undiverse team.

On the other end of the spectrum, an individual that identifies as a non-native, having racialized or darker skin, queer, transgender, disabled, uneducated, religious (not Christian), under 23, over 65 , working-class or overweight deviates from the norm and thus are considered non-dominant, less privileged and often receive discrimination because of it.

These characteristics will obviously differentiate from industry to industry and from area to area, depending on the norm within that demographic.

So, if they deviate from the norm, why can’t they be called diverse?

Now that you know the difference between diverse and undiverse, majority and a minority, it may be tempting to label an employee that falls under the latter.

But by describing or calling someone diverse, you are implying that them being ‘different’ is inherent to them, and is therefore absolute. This implies that there is a ‘default’ within your team that they are in direct conflict with, and in turn, reinforcing dominant identities as ‘normal or accepted’, positioning them as the ‘other’, abnormal or insignificant as a result.

And, just by saying one word, you have unintentionally reinforced prejudiced views within the workplace.

Be an investor in people

You should always be striving to make your workplace more diverse.

The goal should be to get to the place where your team represents so many different cultures that there is no risk of falling into the trap mentioned above. Because the only ‘default’ or ‘norm’ of your business is diversity itself.

Because, while a person is not ‘diverse’, having a diverse team will bring a diverse range of experiences, perspectives, languages, and knowledge to your business, which, in turn, connects you to leads, shareholders and client bases you would never have been able to otherwise.

Nevertheless, this should not be the main reason you implement diversity initiatives. The main drive behind your diversity and inclusion efforts should be a commitment to investing in people and giving everybody a chance, no matter who they are.

Inclusion doesn’t just happen; we have to design for it.

Much to the dismay of some, inclusion isn’t a natural by-product of diversity. An organization can be diverse without being inclusive.

Verna Myers famously said in her in TED Talk.

“Diversity is an invitation to a party, inclusion is being asked to dance.” 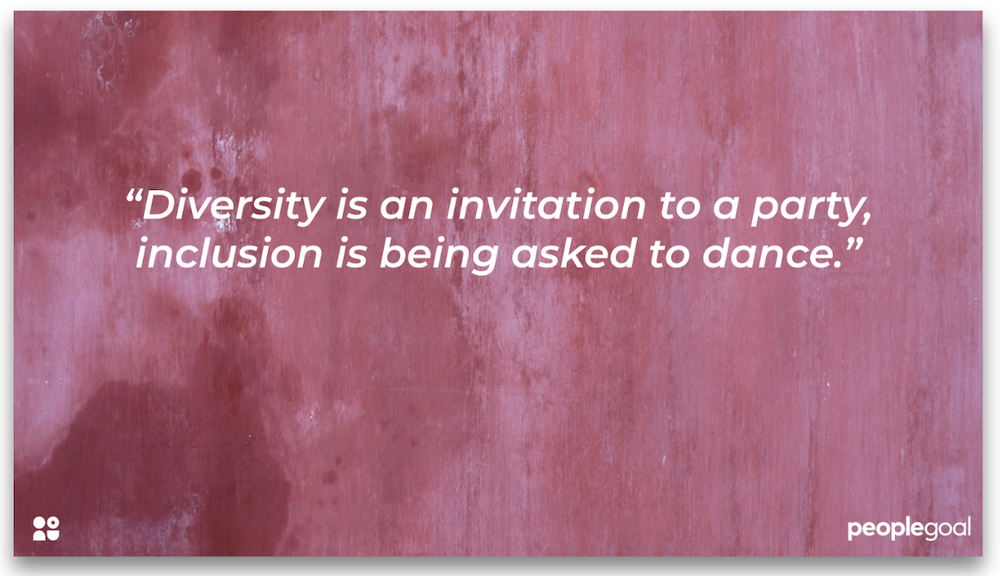 However, being asked to do something does not necessitate inclusion – inclusion is about respect and consideration.

Diversity relates to the quality of life.

A diverse workplace accepts that there may be people who practice their religion at work but an inclusive workplace will create a space for people to pray in private. By doing this, you are encouraging them to bring more of themselves to work instead of implying for them to leave that specific part of themselves at home (i.e. you can do it here, but you’ll have to do it with everybody’s eyes on you).

To sum it up, diversity is only the first step in creating a welcoming environment, then you have to work and communicate directly with every individual that make your diverse team to gain an understanding of what kind of policies, processes, products, and environments would make them feel more included day-to-day, so when they wake up, they know that, at least within their place of work, they are entering an equitable safe-space.

There are four areas that face issues with diversity: 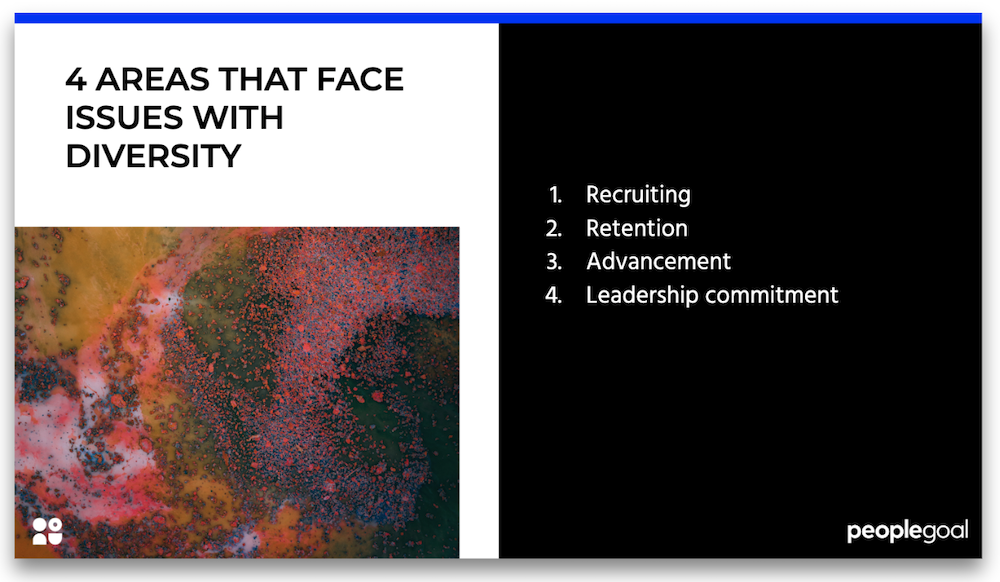 Many leaders believe that the area proposing the most diversity obstacles is recruitment. This could not be furthr from the truth. It is much easier

“Hiring people from diverse groups is easier than successfully addressing the deep-rooted cultural and organizational issues that those groups face in their day-to-day work experience.” 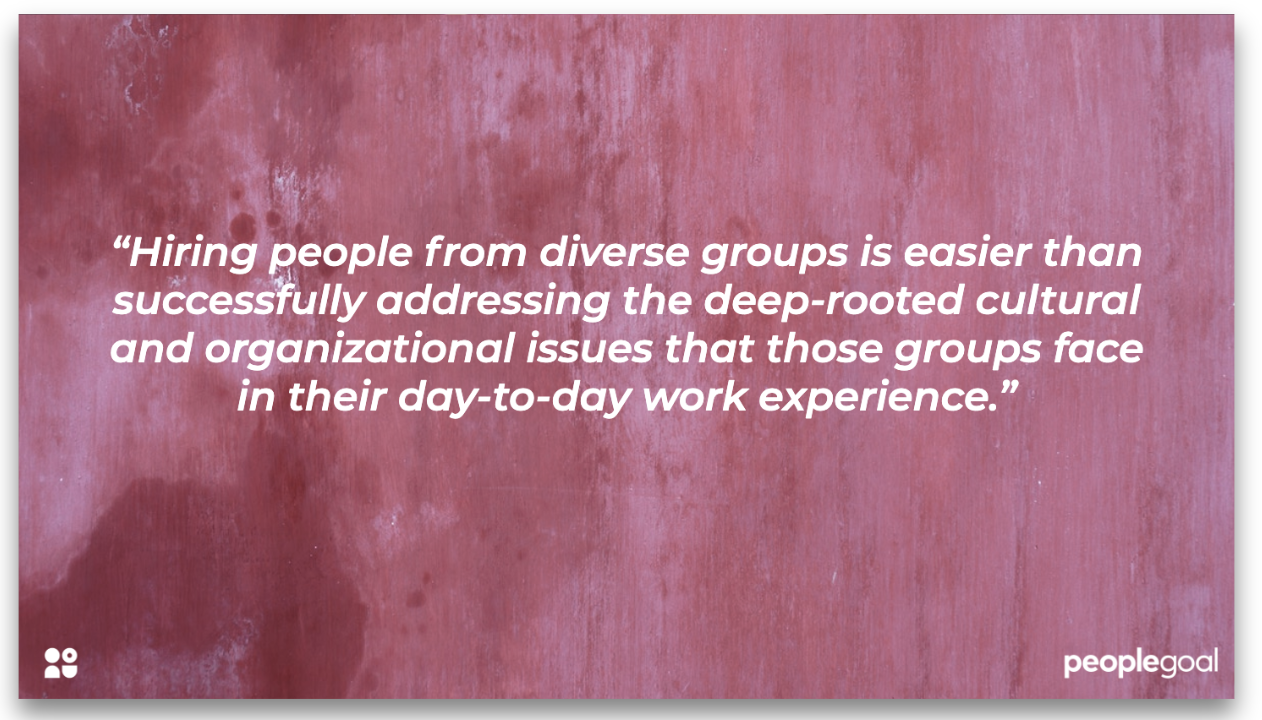 BCG researchers named these measures so because they were ranked in the top ten by all employees, across all diversity groups including age, gender, race, ethnicity, sexual orientation. This means that, that this is unanimously agreed that these effectively reduce bias within the workplace and so, by the very least, you should be implementing them in your own organization.

The first set of solutions includes back-to-basics measures. All were ranked in the top ten by all employees regardless of age, gender, race or ethnicity, or LGBTQ status, and all are aimed at reducing bias. These should be priorities for any organization that wants to improve diversity.

“A well-crafted policy can effectively lay out the company’s values, and frequently and explicitly communicating such a policy to employees sends a signal that the company takes the issue of diversity seriously.” 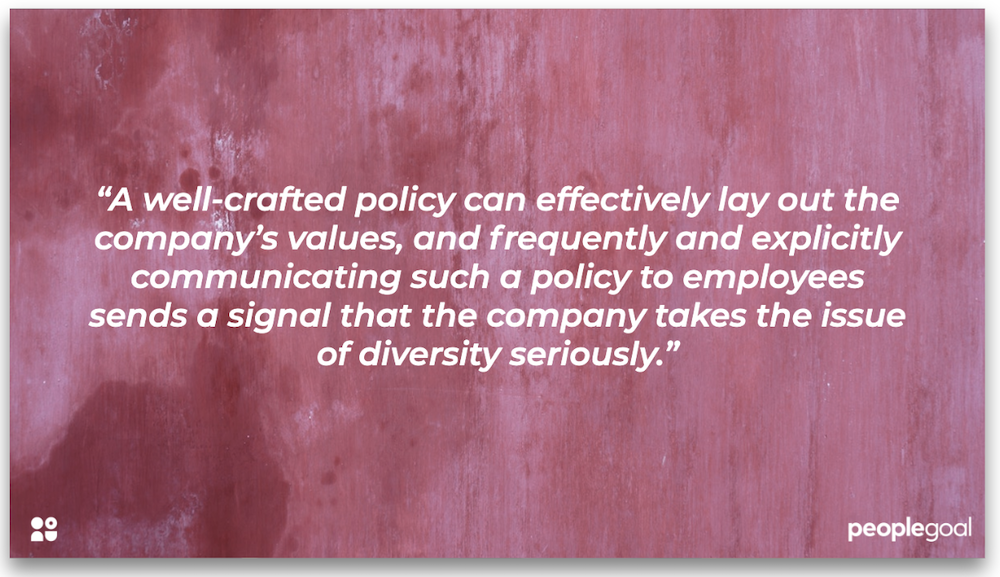 If you need a starting point for writing an anti-discrimination policy to pair with your DEI statement, here’s our comprehensive template.

Formal training to mitigate biases and increase cultural competency is key for any organization. Most managers and people for that matter don’t think that they are biased, yet bias is wired into human nature. The first step is admitting that you have unconscious biases, and then we can work on ways to understand their harmful effects and implement ways of changing them with actionable strategies.

“Biases stem from the genetic shortcuts that help our brains recognize patterns.” 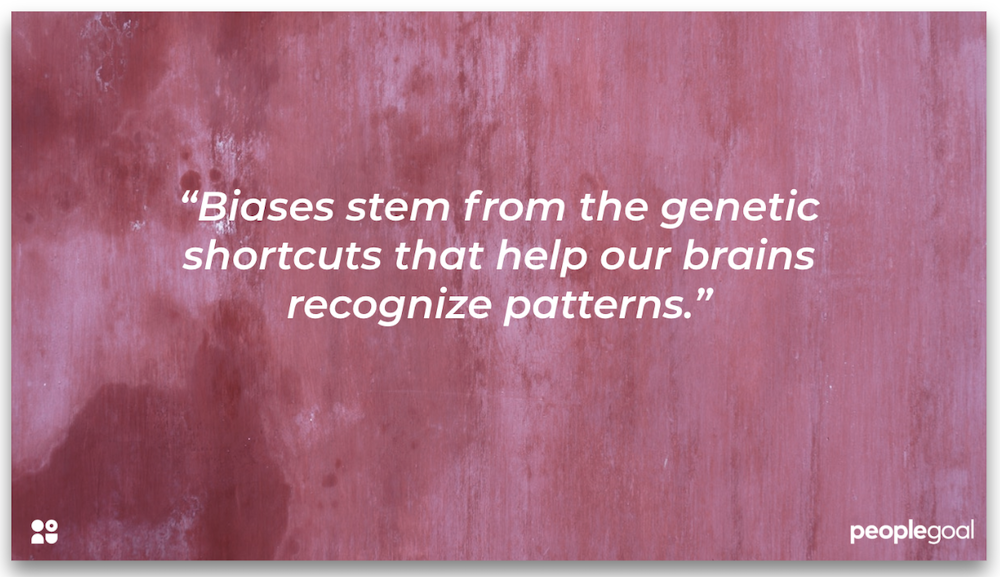 To maintain the momentum created by effective training programs, companies should initiate informal discussion among employees for them to share any bias or cultural related issues they may be experiencing. These could come in the form of support, resource or forum groups, unstructured but led by a moderator that should provide an opportunity for employees to practice ad apply premises they learned during training to real-life situations. LGBTQ individuals rankled this very highly, deeming it efefctive at increasing awareness. Understanding an diclusion.

Respondents in all categories valued the need for elimination bias around appraisals and promotions. Companies should meticulously track diversity metrics pertaining to promotions. This should highlight areas in which biases may exist—both who is (or is not) getting promoted across diverse populations and whether evaluations include questions or criteria that indicate systemic bias because certain groups consistently perform at different levels.

Moreover, feedback should be structured so that it corresponds more closely to the completion of projects and goals, as opposed to personality-based observations that may be subject to bias (see our blog on the potential biases of performance appraisals).

Each diverse group has its own list of measures that directly benefits them whilst alleviating their individual obstacles, and management and employees in each group agree that these measures are effective.

Out of 31 diversity initiatives, women ranked this the second most effective measure (after anti-discrimination policies). Flexible work programs can mean a number of different things depending on the company including part-time positions, modified work hours or remote working.

People of Color: management and recruitment

Employees of color see measures related to leadership and recruitment as the most crucial. For example, they ranked blind screening of résumés during recruitment third, after formal training and anti-discrimination policies.

There’s a lot of room for progress regarding diversity and inclusion in the workplace, but being aware of the ones that the targeted individuals, as opposed to you or the majority, believe are the most effective, then you’re on the right track. 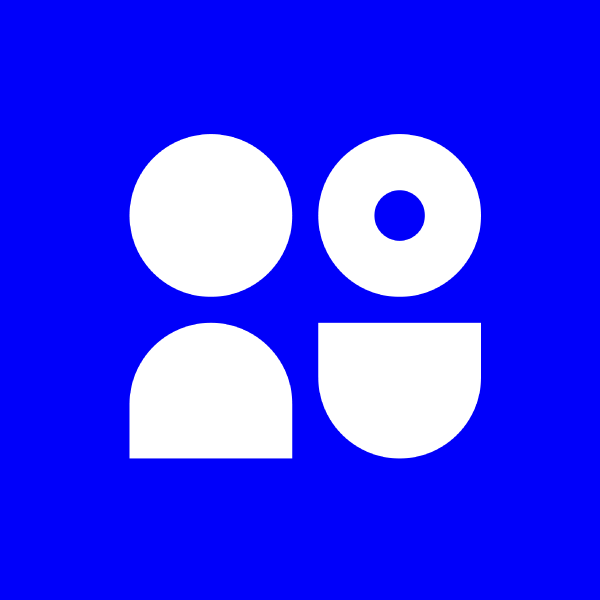